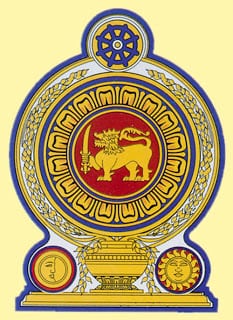 The national emblem of Sri Lanka used by Sri Lankan government is in connection with the administrative purpose and government of the country. The current republican emblem was adopted in 1972 after the country was declared as a republic state.

The present emblem of was created in 1972 with the ideas and guidance of Mr. Nissanka Wijerathna.  At the time, he was Permanent Secretary to the Ministry of Cultural Affairs and Chairman of the National Emblem and Flag Design Committee. The designer of the emblem was Venerable Mapalagama Wipulasara Maha Thera and Art Work by Artist Mr S.M Seneviratne.

The emblem has a lion, holding a sword in its right for paw on a maroon background encircled with petals of a Blue lotus. And this is placed on top of a traditional grain vase that sprouts sheaves of Rice grains that circle the border reflecting prosperity.

The Crest is the Dharmachkra, symbolizing the country’s foremost place for Buddhism and just rule. Traditional Sinhalese heraldic symbols for the sun and the moon form the Supporters.  Sun and Moon, and Lion depicting Lord Buddha are given less prominence than cart wheel of English Buddhism, so it is in great discordance with National Scriptures.