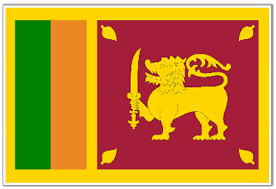 Prior to 1815 the gold lion was originally the National Flag of Ceylon. Its four pipul leaves are Buddhist symbol and the sword is said to represent authority.  The green and orange colour represents Muslim and Tamil people. Dark red rectangular panel bordered yellow lion passant holding a sword upright in its right for paw. Around the background is a gold border and to its left are two vertical stripes of equal size in green and saffron. With the saffron stripe closest to the lion. One Reply to “National Flag in Sri Lanka”