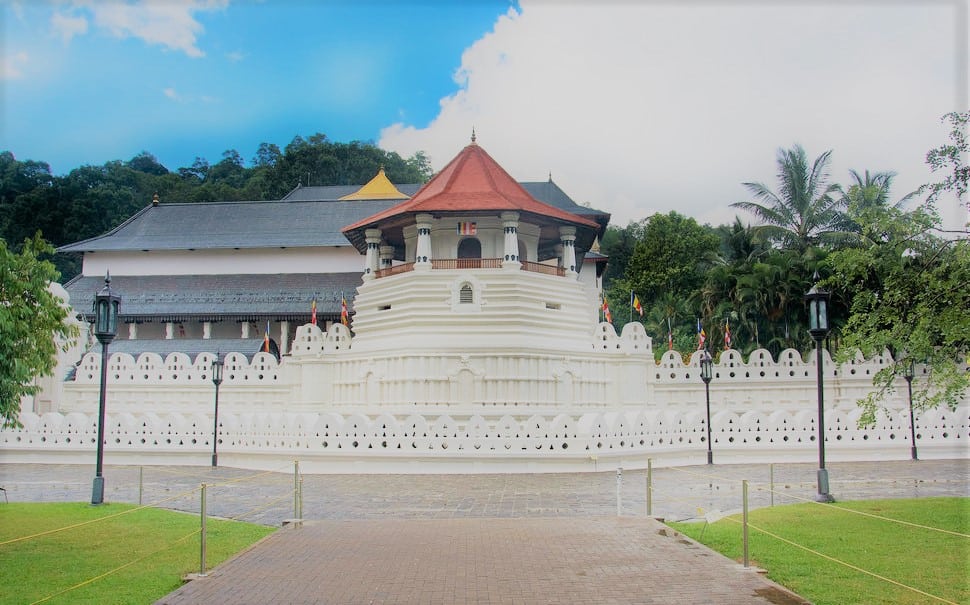 The temple of tooth is located in the beautiful surrounding in front of the Kandy Lake.  And also this temple is situted in Kandy district. This temple and this holy place is named as the world heritage. This is one of the most scared and reliouges place of Buddhist. This is also and outstanding  cultural valuble places. The tooth relic of Lord Buddha is deposited in the goldern cascket, which is respected and worshiped by the devotees every day. On poya days large number of pilgrims worship the tooth relic.

During the regin of King Kitsiri Mevan the Tooth Relic was brought to Ceylon from Kalinga by Princess Hemamali and Prince Danta. The Tooth Relic was considered as the symbol of kingship and became the most sacred object of worship in the island. it was customary for the kings to build a temple near the place, and to become its custodian. the Tooth Relic was taken to Polonnaruwa, Beligala, Dambadadeniya and Yapahuwa, the capitals of ancient Ceylon. It was Aryachakravarti who seized the Tooth Relic and fled to India. However King Parakramabahu III was able to bring the Relic back to Sri Lanka.

It was King Vimaladharmasooriya I who brought back the Tooth Relic to Kandy. The Tooth Relic temple built by him  was renovated by his son Veera Parakrama Narendasingha and Kirti Sri Rajasinghe respectively. King Sri Wicramarajasingha built the Pttirippuwa or the Octganal Shaped building. a new building was constructed to enclose the ancient temple without changing its architecture. The Tooth Relic is placed in the old shrine.

Some traditional rituals are performed every day befor meals. The drumers beat the drums and conch shell is blown to show the respect befor the alms given. It is called the “Thewawa”. The hold area is considerd as a scared place. At any time of the year Kandy is a romantic city, but in August the ancient capital becomes the venue for one of the most legendary festivals in Asia. The Esala perahera is also held to respect for the tooth relic of the Lord Buddha.

There is a musium, the shrine room was made out of the wood. The statue of late prime minister D.S.Senanayake and child Madduma Bandara’s statues are made in front of the temple.