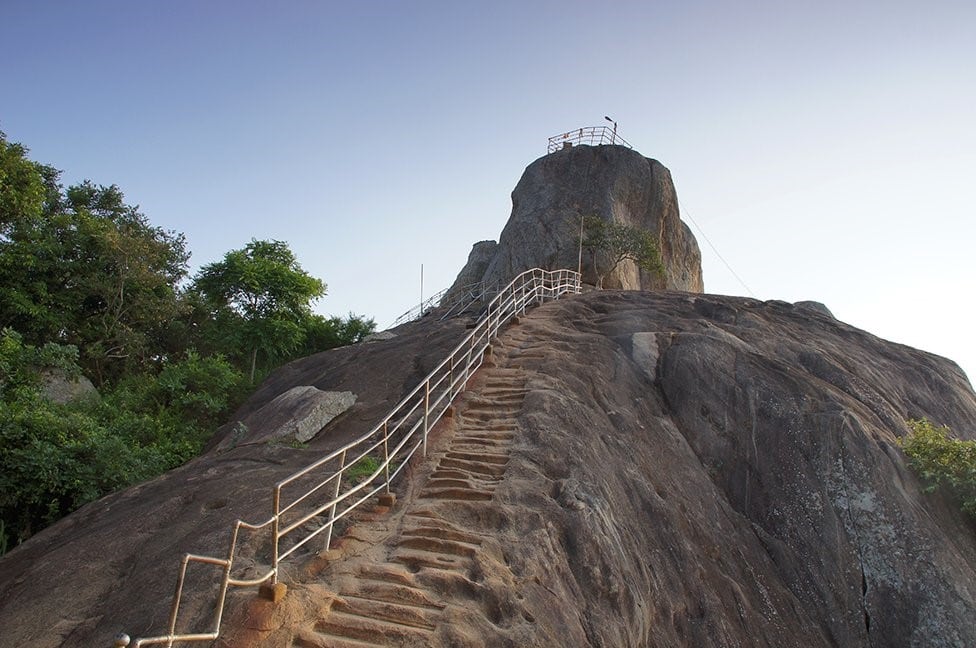 8 miles east of Anuradhapura, close to the Anuradhapura – Trincomalee road is situated the “Missaka Pabbata” which is 1000 feet in height and is one of the peaks of a mountainous range. Though this was called Cetiyagiri or Sagiri, it was popularly known as Mihintale, the cradle of Buddhism in Sri Lanka.

Thera Mahinda came to Ceylon from India on the Full moon poya day of the month, of Poson (June) and met King Devanampiyatissa and the people, and preached the doctrine. The traditional spot where this meeting took place is revered by the Buddhists of Sri Lanka. Therefore in the month of Poson, Buddhists make their pilgrimage to Anuradhapura and Mihintale.

From ancient times a large number of large steps were constructed to climb Mihintale. It is stated that King Devanampiyatissa constructed a vihara and 68 caves for the Bhikkhus to reside in. At Mihintale there gradually grew a number of Buddhist viharas with all the dependent buildings characteristic of monasteries of that period. Is situated on the plain close to the peak of the mountain, and is said to have been built by King Makalantissa. The ruins show that there has been a house built encircling the stupa. The Dagaba is said to enshrine the relics of the great Apostle Mahinda. The traditional spot where this meeting took place is marked by the Ambasthala Dagaba. When proceeding from Ambastala dagaba along the narrow road, on the slope is the cave knows as Mihindu Guhawa or the cave of Arahanth Mahinda, where he resided. Out of the caves the most famous and incidentally the most sacred to Buddhists is this cave with its flattened slab on which Thera Mahinda was accustomed to rest. Passing Ambasthalaya on the western side is a flight of steps. When going down the steps one could see the Naaga Pokuna. This has been constructed by King  Agbo I and its name is derived as there are figures of snakes with their hoods spread-out in the back ground and is one of the most famous ponds. Is also one of the famous ponds at Mihintale. The name is derived from the fact that the water in the pond appears to be black in colour. It is believed that on new moon day, Kalu Buddha Rakkhita Thera sat under the Thimbiriya tree, close to the Kaludiya Pokuna, preached on sermon based on kaalakaaraama Sutta.