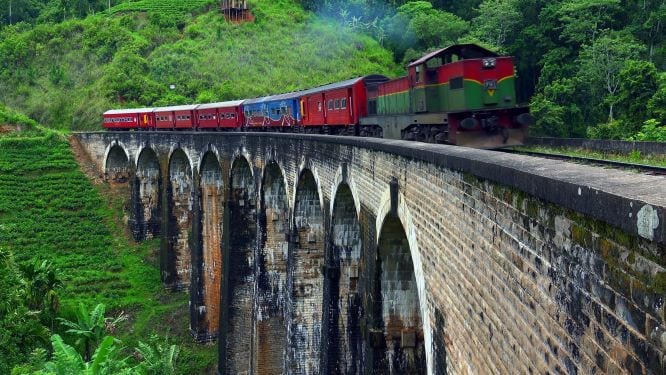 The Nine Arches Bridge called the Bridge in the Sky; it is located in Demodara, between Ella and Demodara Railway stations in Sri Lanka. And it’s Located almost 3100 feet above the sea level, this 99.6ft high bridge is called “Ahas namaye palama” (Nine skies bridge) in Sinhala. When one stands underneath it and looks up there is a beautiful sight of ‘nine skies’ through the nine arches, hence the Sinhala name. This bridge is also called ‘The Bridge in the sky’ due to the sheer height.

This bridge, which is almost 100 years old, has been built with blocks of stone and cement without any strengthening iron or concrete. The giant arches take the bridge on a curved path to link to mountains. The Bridge was commissioned in 1921 under the British Government.

The construction of the bridge is generally attributed to a local Ceylonese builder, P. K. Appuhami, in consultation with British engineers. The chief designer and project manager of the ‘upcountry railway line of Ceylon’ project was Mr. D.J. Wimalasurendra, a distinguished Ceylonese engineer and inventor. The designer of the viaduct was Harold Cuthbert Mar wood of Railway Construction Department of Ceylon Government Railway. The 1923 report titled “Construction of a Concrete Railway Viaduct in Ceylon” published by the Engineering Association of Ceylon has details of all the records including the plans and drawings.

The surrounding area has seen a steady increase of tourism due to the bridge’s architectural ingenuity and the profuse greenery in the nearby hillsides. It is one of the best examples of colonial-era railway construction in the country.