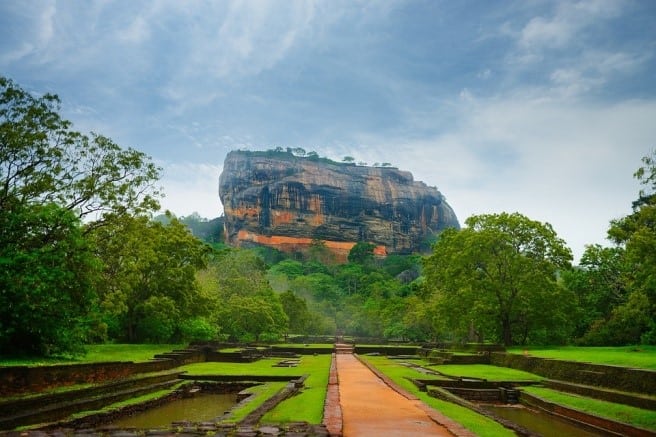 Sigiriya is one of the world heritage sites in Sri Lanka. It is in the village of Sigiriya near Dambulla in the District of Matale. This is a fortress built on a rock, by king Kassayapa.

Kashyapa now placed himself on the throne and ruled at Anuradhapura. His subjects however were displeased with him over the foul murder of his father, and he lived in constant fear of rebellion. He also feared tht his brother, with an army from india, would invade Ceylon at any moment. So he moved his capital to sigiriya where, on the top of the Rock, rebuilt himself a large and beautiful palace. He built a wonderful staircase leading to it through the mouth of huge lion carved out of stone. He named the Rock “Sinha-giri” or “Sigiri”, which means “Lion Rock”. Round this built a moat to protect himself against enemies. On a side of the royal places he had a large pond made several watch-towers, built on summit of the Rock, overlooked the surrounding country

It attracts visitors from all over the world. It has got the name “Sigiriya” due to its entrance being built like the throat of a lion. In Sinhala giriya means the throat and singha means lion. Hence, he name Sigiriya came to exist.

This great piece of art stands proud depicting our past glory which had shone through prosperity and unity.

Even the modern archaeologists wonder at the technical know-how ancestors had in building this fortress. Half way up the rock you can see the world famous frescoes (murals) in a row of caves. The paints and the mixture used on the walls to make murals had been prepared according to a secret formula of our ancestors.

Then there is the mirror-wall “Katapath Paura” by the side of a passage. On this, you can see more than 700 Sinhala verses, grafitis written during the period from the 5th century to the 13th century by popular visitors admiring the beauty of those women. Then there are pleasure gardens, state-halls, ponds, a network of advanced toilets and many such things to be admired by a visitor.

It is wonderful to see on rainy days the net-work of pipe lines laid hidden work automatically shooting water as in a display. From faraway you can see this fortress has been built balancing on one axis. The moat built round the rock to defend it from enemy attacks is another important feature of it.

Sigiriya gives birth to a new picture about Sri Lanka. It speaks volumes about the wonders of our ancestors. So protect Sigiriya and then you will be protecting your island nation as well.