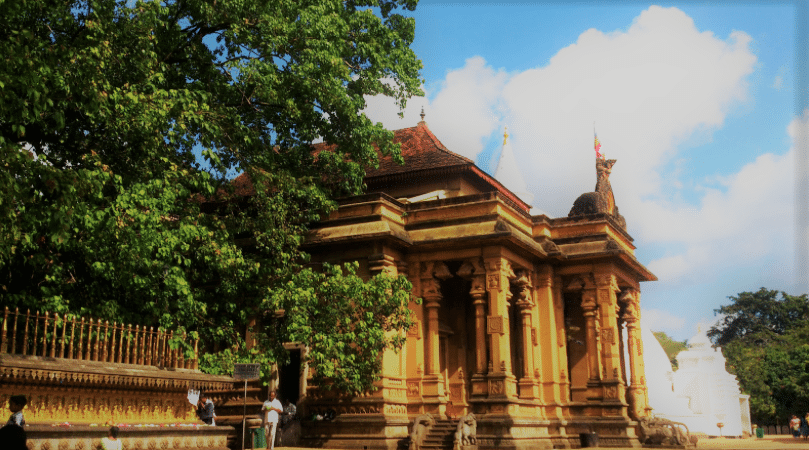 The Kelaniya Raja Maha Vihara or Kelaniya Temple is a Buddhist temple in Kelaniya, Sri Lanka, seven miles from Colombo. The Chief Incumbent (Chief Priest) is Venerable Professor Kollupitiye Mahinda Sangharakkhitha Thera. Buddhists believe the temple to have been hallowed during the third and final visit of the Lord Buddha to Sri Lanka, Accoding to the chronicles, Lord Buddha on the 8th year after enlightenment on full moonday of Vesak, visited Kelaniya on the invitation of Maniakkhika the Naaga King of Kelaniya, seated on the gem throne the Blessed one preached the doctrine.

The gem studded throne is enshrined in the dagaba. This Vihara was built by King Yataalatissa. The height of stupa is 80 feet, circumference is 180 feet. The dagaba is in shape of a heap of paddy. In the temple premises are devales dedicated to Gods Kataragama, Vishnu, Naatha and Vibhishana.The original Temple and the Stupa or the Dageba was built in 5th Century BC, but none of the earlier structure survives today.

Mentioned in the Sri Lankan chronicle”Chulavansa” is that, the Kelaniya Temple was five stories high with traditional styling and roofing. It also states that the temple was rebuilt by King Vijayabahu III, (1232-1236) and King Parakrama Bahu II (1236-1270).

The temple flourished during the Kotte era but much of its land was confiscated during the Portuguese empire. Under the Dutch empire, however, there were new gifts of land and under the patronage of King Kirthi Sri Rajasingha the temple was rebuilt. It was refurbished in the first half of the 20th century with the help of Helena Wijewardhana.

The temple is also famous for its image of the reclining Gautama Buddha and paintings by the native artist Solias Mendis which depict important events in the life of the Buddha, in the history of Buddhism in Sri Lanka, also incidents from the Jataka tales.

According to the Galpotta records King Nissanka Malla visited Kelaniya to pay homage. It is recorded that Kalinga Maagha raided the temple and plundered all the wealth. The Portuguese set fire to the temple and destroyed it. Kelani Vihara is one of the 16 sacred shrines in the island. Duruthu Perahera is conducted in the month of January with pomp and glory.