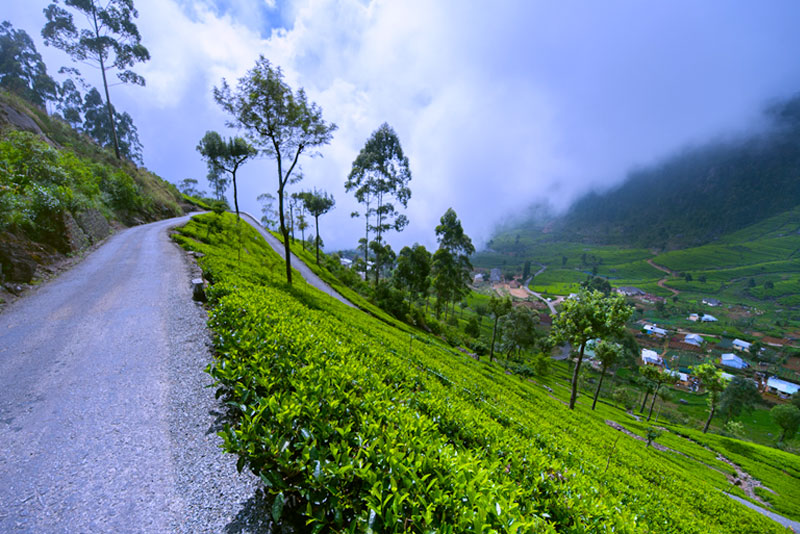 Haputale is a town of Badulla District in the Uva Province, and in the central mountain area of Sri Lanka, governed by an Urban Council. Haputale is surrounded by hills covered with Cloud forests and tea plantations. It’s a wonderful place to retreat for a while and the town has a cooler climate than its surroundings, and the elevation is 1431 m (4695 ft) above the sea level.

The area has a rich bio-diversity dense with numerous varieties of flora and fauna. It’s a relaxed little place with about 5000 inhabitants. Mostly Tamils mixed with some Muslims and Buddhists. The Haputale pass allows views across the Southern plains of Sri Lanka. The South-West boundary of Uva basin is marked by the Haputale mountain ridges, which continue on to Horton Plains and Adam’s Peak to the west. CNN in 2010 named Haputale as one of Asia’s most overlooked destinations.

The Lipton’s Seat is located at Dambatenna in the Haputale Mountain region. This place was a favourite look-outpoint for Sir Thomas Lipton. The point has a fabulous view over Uva, Southern, Sabaragamuwa, Central and Eastern provinces. And also Haputale is a town of Badulla District in the Uva Province, Sri Lanka and in the central mountain area of Sri Lanka The elevation is 1431 m (4695 ft) above the sea level. It is surrounded by hills covered with Cloud forests and tea plantations. The town has a cooler climate than its surroundings, due to its elevation. The Haputale pass allows views across the Southern plains of Sri Lanka.

Lipton’s Seat in Haputale is a favourite among road-trippers looking for a Mountain View vacation. It’s called Lipton’s Seat because it’s where Thomas Lipton sat down with a cuppa and proudly looked over the fruits of his endeavors. Or that’s how the story goes. The Scottish businessman started out in Sri Lanka in the late 1800s, when British colonization made it easy, buying several tea plantations and setting Tamil Indian workers to work on them. Lipton Ceylonta, his brand of tea, was then born, and marketed and exported all over the world. The stuff leaves Lipton’s Seat on Dambatenna Estate and goes to countries worldwide today.

For those who wish for even more stunning view or photographers wishing to snap a picture of nature at its best, Lipton’ seat is best visited early in the morning before sunrise. The change of colors as the sun shows its face, as the thick mist flees the heat revealing the carpet of greens and browns spread out below, is a spectacular sight. There is also a very good chance to see basket bearing tea pluckers making their way to work. However, for those visitors who find it hard to wake early, making the hilltop before 10 am should be sufficient to get a reasonably clear view.