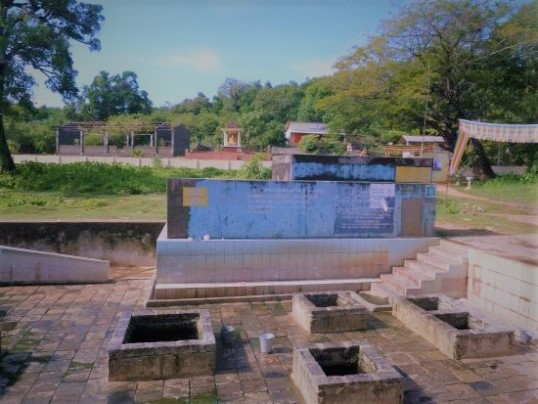 The Kinniya Hot Springs is a site with hot wells located in Trincomalee, Sri Lanka. There are seven wells in a square shape. Wells are only 3–4 feet deep and you can clearly see the bottom. The temperature is considerably high but varies slightly from one spring to another. Wells run out of water, when 10-15 buckets of water are taken out.

It seems that most of those artifacts were destroyed during the Sri Lankan Civil War. On 9 September 2011, the seven hot water wells, charity mound and other scattered building ruins in the site were formally recognized by the Government as an Archaeological protected site in Sri Lanka. The designation was declared under the government Gazette number 1723. Kanniya Hot Water wells has now become a popular attraction for those who visit Trincomalee now that the LTTE Terrorists which controlled this area has been completely wiped out. There are 7 hot springs now converted to bathing wells. The temperature of each is slightly different from each other. It is also believed the water from the wells have therapeutic healing powers and can cure many aliments.

According to the notice board put by the Pradeshiya Saba at the wells, this well goes back to the times of King Ravana who ruled the country over 5000 years ago. But now it has been accepted that these wells belonged to an great Buddhist monastery which span vast area. Ealamisation of the North and East has destroyed the most of the Buddhist remains in these areas and only few has escaped the wrath of the Eelamists who have taken up to the task of erasing all signs of ancient Buddhist civilization in these areas for the last 30-40 years. Luckily, the archeological department has now taken ownership of this land and correct history of these wells are now displayed for the public.

According to the some information, Kanniya Hot water spring has the history from the King Rawana era. It says that King Ravana stuck the earth with his sward in several spots and several fountains were started on those places. The water was hot and thats the beginning of this hot water springs.

Some believes that this is a part of the Buddhist Monastery and Buddhist Monk used this place as a part of their complex. There are some old ruins scattered over the area. It seems that most of those historical artifacts were destroyed in the war time.