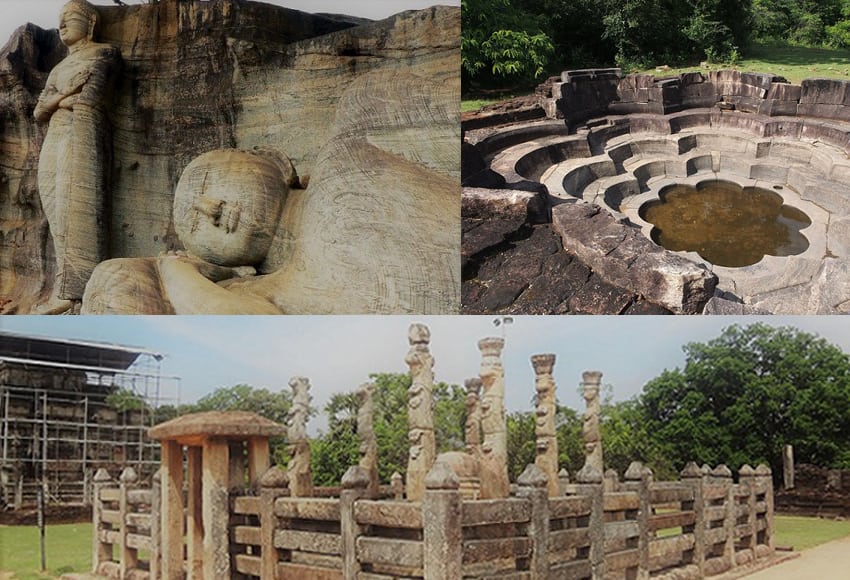 After the decline of the Anuradhapura kingdom, Polonnaruwa became the next seat of rule. The city which is the main town in the North Central Province could be approached when travelling along Trincomalle road, turn off from Habarana proceeding 28 miles on the Batticaloa road.

Polonnaruwa is a historical important city, which was ruled by the king Parakramabahu. This city was known as Kandavuru Nuwara, Pulasthipura and Jananathapura. Among the Kings who ruled in Plonnaruwa are the famous Kings like Vijayabahu I, Parakramabahu the great and King Nissanka Malla, King Kalinga Magha who ruled from Polonnaruwa destroyed Buddhist place of worship and burnt the books. There is a stone of king Parakramabahu also made by the rock. One of the biggest reservoir called “Parakrama Samudraya” collect large some of water.

There are lot of religious monument can be seen even today. The world famous sleeping statue of Load Buddha is carved out of the rock. The other place known as Gal Viharaya, Watadageya,Nishshsanka latha mandapaya are the remaining ruins of those ancient places. They are also built out of the stone pillars.

Passing Kirivehera and proceeding northwards, one sees the Galvihara at Polonnaruwa which was earlier named as “Uttararamaya”. The colossal figures carved on the face of the living rock at Galvihara and the walls constructed to protect the statue can be with certainty be taken as representative of the type of the Buddha image that was common during the Polonnaruwa period. These have been destroyed and only the foundation can be seen. Four colossal Buddha images have been carved from one large rock. At the left while facing the shrine is a sedent Buddha. This image is preserved. In the background of the statue on the edge of the rock is a carving of a pandol.

It is Vidyadhara Cave shrine hollowed out with the alter, a stone umbrella (supported by a stone shaft over the dome of the stupa) and other decorations and the sedent Buddha image is carved out of the living rock. This is an artificial cave. Although these are preserved all the painting has been destroyed.

The statue of the Buddha standing with arms crosses over the chest and with a sorrowful expression in the countenance and is the only one is kind in Ceylon.  And also at the extreme right is an image of the recumbent Buddha. A small section of this has peeled off. There is also a view that this image depicts the pariniwaana of the Load Buddha. (Passing away of the Buddha) It was built by king Parakramabahau in B.C. 12. This is carved out of the rock. The long of this statue is 42 feet and this statue is special in the Gal Viharaya.

This is largest Dageba in Polonnaruwa. It was built by King Nissanka Malla. There is a rock inscription assigned to the King. There are many shrine rooms around the Dageba. The height of Rankoth vehera is 180 feet and 550 feet is extent. This stupa thus surpassed in magnitude every stupa of that type built during the Polonnaruwa period. There are a number of Buddhist shrines around it. This is the largest stupa in Polonnaruwa. The original shape of this Dageba has not changed yet. This Dageba was contacted to memorize the king Prakramabahu’s wife subadra. This height of Dageba is 80 feet and 88 feet is extent.  This large building is situated to the north of Lankathilake Vihara. Rankoth Vehera is of the same architectural pattern as the Kiri Vehera, but far exeeds it in dimension. The best preserved of the Polonnaruwa stupas is Kiri Vehera, which being the largest monument of this type at Polonnaruwa. The white plaster on the stupa can still be seen. This is also assigned to Parakramabahu I. This was a square shape building and made out of the stone pillars. At the top of the pillars a lotus flower is carved on each of them. It is not definitely known why this small building consisting of stone pillars with decorative scroll design was constructed. In the center is a stone platform and the space is quite small. This is enclosed by a small railing. Passing Demala Maha Seya and proceeding a little distance, and turning towards the left are a beautiful pond Known as the lotus pond. One of the most fascinating sights in Polonnaruwa is a bath cut in stone, resembling a full blown eight-petaled lotus. Surrounding this is a brick wall constructed for its protection from what remain of this place shows that water sent to the pond through pipelines. The Statue of King Parakramabahu

North of Pothgul Vihara on a sligt elevation is a statue of granite. This remarkably fine statue is 11 ½ feet high, rock-cut nearly in the full round of a king probably Parakramabahu I himself.  This statue bearing in his hands an object like an ola leaf is facing the Pothgul Vihara. Therefore it can be concluded that there would have been some connection between pothgul Vihara and the person representing the statue. The body of the satue is drapped in a robe, with a sash round the waist has a headgear resembling an ancient Turkish hat and a yellow thread on the shoulder, and bare bodied above the waist. One of the largest tanks known as Parakrama Samudraya was constructed by King Parakramabahau I. he is said to have declared that “Not even a drop of water that comes from the rain must flow into the ocean, without being made useful to  men” .

When walking about a mile the bund of this tank is a building of a unique type, is the so called Pothgul Viharaya. The building is a rotunda. In the surrounding area are many ruins and it is accepted that this would have been an educational institution consisting of a large library. Is a circular relic house or house built encircling a stupa. The Watadage at Plonnaruwa represents the utmost elaboration of the circular chetiyaghara in Ceylon. This is a beautiful circular structure. It consists of two concentric circular stone terraces one above the other. On the stone pillars is constructed the roof of the building.  A conventional entrance leads to the first terrace, from this to the upper terrace there are 4 entrances at the 4 cardinal points. The upper terrace housed a small Dagaba with 4 statues depicting posture of tranquility (Samadhi). The floor is of stone slabs. According to the rock inscription found there, it is believed that King Nissanka Malla constructed this building. Only one building is assigned to King Vijabahu I and that is the temple of the Tooth on the quadrangle (Dalada Maluwa) in front of the Watadage. This consisted of several storeys. The Tooth Relic would have been placed on the upper story. This building is situated close to Galptha insciptions. It is believed that this temple of Tooth is assigned to King Nissanka Malla. On the western side of the building is the stairway consisting of 10 stone steps. Therefore it could be concluded that this building would have been multi storeyed. (The name is due to a belief that it was completed in 60 hours)